If you vote Republican today, what are you REALLY voting FOR? Handing Your Freedoms Away 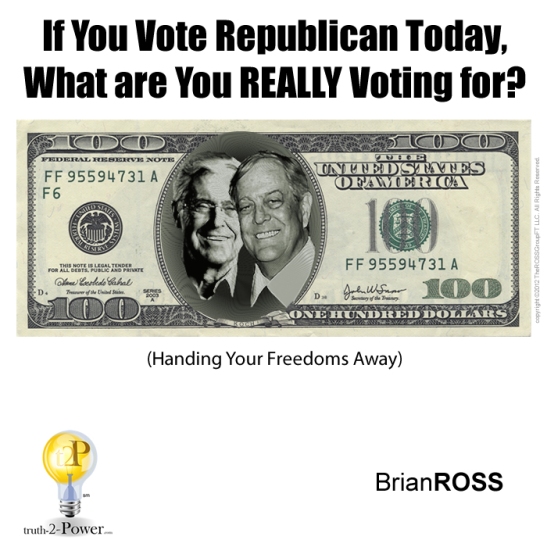 There are thousands of candidates and hundreds of measures before the voters today. The economy is number one on most American’s minds, yet it is the farthest thing from anything you will see on a ballot. Before you pull a lever, punch a chad or draw a line across the broken arrow, maybe you should know what you’re REALLY voting for.

Billions have been spent on this election. By whom? To what purpose?

Elections are about who holds power. Democracy hands you, the average citizen, that power.  People with money are often aligned against your self-interest.  So the trick is to get you to find a compelling reason to vote against that interest.  Given the polls as of yesterday, thanks to Citizens United, they are succeeding.

First, who moves all that money? The billions being spent come from three sources:

With a rising minority majority, and playing upon the fears of religious groups, fear of the other has been the compelling push to get you to vote against your self interest, and serve the needs of the 1% of the 1%.

The rich have become so much richer and the middle class and poor that much poorer in the last 35 years since Ronald Reagan’s rise, that these people are far richer than the Robber Barons of 20th century’s “Gilded Age.”  The Economist recently reported:

“Including capital gains, the share of national income going to the richest 1% of Americans has doubled since 1980, from 10% to 20%, roughly where it was a century ago. Even more striking, the share going to the top 0.01%—some 16,000 families with an average income of $24m—has quadrupled, from just over 1% to almost 5%. That is a bigger slice of the national pie than the top 0.01% received 100 years ago.

Once upon a time, the masses of people on this planet were controlled by a few people who used the fear of whatever Almighty was popular in that age to channel ignorance and fear through the wholesale use of lies that made a few people who were some combination of  smarter, slyer or more physically ruthless, a whole lot richer.

All modern political systems, other than the rank dictatorships or kingdoms which still exist, have changed the method of control, and have allowed varying measure of personal freedoms, but the constant remains:

They channel fear and ignorance of the mass of humanity living in their borders to produce maximum wealth and power for a very few. In this country we’ve substituted religion and/or the whip, gun, and sword for television, radio, news print, billboard and lawn sign.

What Republicans and their funders would like for you to forget, walking into a polling place today, is that they are the primary agents of that inequality.

“The bank rescues shone a spotlight on the unfairness of a system in which affluent bankers were bailed out whereas ordinary folk lost their houses and jobs. And in today’s sluggish economies, more inequality often means that people at the bottom and even in the middle of the income distribution are falling behind not just in relative but also in absolute terms.” [1]

A vote for Mitt Romney camp is a vote to restore these social Darwinists‘ “natural order” of exploitation.

What are you voting for today?

Either the American Middle Class is in the democracy’s driver’s seat, or the wealthy get it back after losing it to the New Deal when their excess imploded the economy back in the 1920s.

They count on you being so saturated with Jersey Shore and so poorly educated in civics and history that you’ll forget that America was not built as a real pluralistic society until the 1940s.

Teddy Roosevelt wasn’t supposed to be president. The assassination of President William McKinley ushered in the Roosevelts, and the American Progressive movement which, after the Great Depression, lead to Franklin Delano Roosevelt’s “New Deal,” which corrected the lop-sided control that early industrialists took over the American people.

FDR worked with the premise that a strong and thriving middle class creates a political center weight, a sort of regulator that keeps the United States from veering wildly from the Far Right to the Far Left.  To achieve that, you need an educated and highly literate state. So we set up better channels to higher learning, and GI Bill that turned soldiers into the smart people who could create a greater economy and be well-reasoned voters in the better society that prosperity created.

The Founding Fathers were big on Rousseau’s philosophy of a social contract.  All legal contracts are based on “consideration.”  The simple notion that in a deal, I get something, in exchange you get something.

In the royal system, as king, I would get everything, because [INSERT DIVINE BEING HERE] says so, and you get what little is left, because [INSERT DIVINE BEING HERE] says so, BUT, the good news for you is that the NEXT LIFE is paradise and as long as you suffer like a good little schmuck, you get milk,honey, and whatever version of paradise, from Valhalla to Heaven, that your particular belief system serves up.

Republicans talk a good game about this being a Christian nation, but it wasn’t until the social safety net was put in place.  In the richest country in the world, we take care of our lesser citizens.  While we are all political equals, the American body politic varies widely in physical ability and well being, psychological self-control, and mental aptitude.

There is a Civil War going on in the Republican Party between the extremist groups that have dominated it since the days of Ronald Reagan. Both groups agree on one thing; Their coveted White America’s power is slipping away from them.

By 2016, white America will no longer be the majority.

To get into power now, they can set-up control that will keep them in the power structure for decades longer than their democratic voting abilities carry them.

This isn’t a newsflash to the shrinking base of Republicans whose extremism has shrunk them to 2 in 10 registered voters.

During the post-Reagan years a pattern has popped up.  Republicans will sell economic security, or fear of some “other” domestic or foreign, to gain your confidence, power, and then CONTROL. What do they do once they have it?

Certainly it has not been making average Americans more prosperous.

Today, you may think that you’re voting for your congressman, the president, a judge or two and a handful of ballot measures.

If you vote Republican today, here is what you’re really voting for:

Your decision at the ballot box today might seem to be about the economy or jobs or Israel, but it really is about whether you believe in the middle class in this country, the regulator of a fair and free democracy, or not.

The 1% paid billions to have you to be distracted by abortion, Israel, immigration reform, or whatever your pet peeve is. Don’t justify the outrage of Citizens United. Corporations and the billionaires that back them have enough influence already.  Rise above. See the forest for the trees. Do not endorse an America sinking into fascism, or it will slide into a future of a nation divided.

The power to save America is in the pen, punch, or lever in your hand today. VOTE.