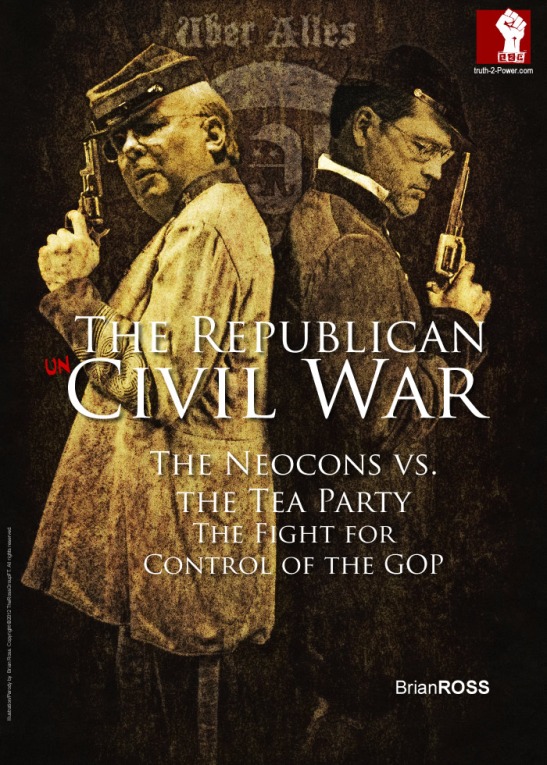 This election is not about Obama-Romney as much as it is about the very uncivil Civil War being conducted in the Republican Party, where one of its two factions is culminating a 35 year party coup that will reshape American politics forever. Even though the Republicans may seem, particularly to Liberals, like one unified front, they have been anything but.

As we noted earlier this year, the Republican Party is deeply divided between old-school Reagan Neocons, the Karl Rove faction whose standard bearers include Mr. Romney, and the 19th century-revisionist, extremist John Bircher Libertarians of Grover Norquist, the Koch brothers, et al who control the money that funds the Tea Party.

We saw those divisions emerge as the Neocons’ candidates, Mr. Romney and Mr. Gingrich, were slammed hard by big money tossed primarily at Rick Santorum.  Romney struggled to clinch the nomination because changes in campaign spending rules allowed Tea Party backers like the Kochs and Foster Friess to stick monkey wrenches into the nominating process, just as they’ve been tampering with the Congress and state houses around the nation.

The GOP is a political party that registers barely 2 in 10 Americans, yet billions from a handful of Citizens United donors,  the richest handful of the 1%, will have a significant impact on this election.  Not on the presidential race as much as the local races for the state and federal legislatures.

It is common, particularly for the TV talking heads, to lump both groups into one GOP whole. Frequently as they rant on to the host, though, you can still pick up the distinct agendas of the two camps.

What makes Neocons and The John Birch-backed Tea Party different? NeoCons are not anti-big government. They like big government, particularly when it:

By contrast the John Birch strain of Libertarians and their puppet show, the Tea Party hate government, and engage in its destruction from within. They differ from Ron Paul Libertarians in that Paul’s broader populist utopianism doesn’t appeal to them.

Birchers don’t seek the government off of the back of all citizens, just the anointed few of the 1%.  Bircher Libertarians want a government with no fiscal controls and low taxation, but with extreme social controls of the population to keep parts of society with whom they either disagree or those that they find distasteful under control and unequal. It is their agenda that has driven so many into the Independent column politically.

What would have been passed off in Ronald Reagan’s time as lunatic fringe nonsense is now mainstream Republican Party dogma.  Ronald Reagan, whose name is oft-invoked by the Tea Party, could never run for President under the draconian standards which they set.

Grover Norquist signalled to those willing to listen in a barely watched CSPAN-covered speech that the White House is more of a figure-head office in the hard-Right new world order. The keys to the castle lie with Congress.

Norquist’s Teahadis, aided by powerful wealthy groups like the Club for Growth, have hunted “RINO” (Republican in Name Only) moderates out of the party over the last few decades. Today that endangered species is on the border of extinction.

The hunting ground has shifted from the House to the Senate. Senator Dick Lugar of Indiana was a more prominent recent casualty of groups that have purged the party of moderates. NeoCons who won’t vote in absolutist terms to bring down the government, or at least state publicly that they back the radical Right, find themselves with primary opponents from the Tea Party.

The recent bludgeoning of David Dewhurst by Teahadi Ted Cruz in Texas’ Republican primaries in 2012 is another troubling sign that the Norquist’s Libertarian faction has its sights set on seating Teahadis in the Senate as well.

Karl Rove is the Neocon’s General Custer. He’s making his last stand with his American Crossroads and Crossroads GPS funds. Their stated aim is to take on Mr. Obama, and they do try to off-set Democratic seats with Republican ones, but they are primarily waging war with the Norquist’s John Bircher Libertarians to prop up dozens of neocon-schooled Republican regulars.

Who’s winning? The Tea Party owns the House, and more than 20 state houses.  Speaker Boehner, a Neocon, is unable to keep them in line. They now have their eye on the big prize: The United States Senate.

Right now, the only thing that prevents the Senate from grinding to a halt is that the Democrats hold a slim majority. The Senate, built by those patrician Founding Fathers, was supposed to be the bastion of calm and sober deliberation of policies and laws, the back-stop to filter the popularly-elected House’s heated passions and possible take-overs like the one we are witnessing now by a powerful few manipulating an ill-informed electorate.

Today both bodies of Congress are popularly elected. Norquist and his allies are looking to unseat more moderate Neocon senators, and replace them with more of the same monkey wrench Teahadis who have turned the House into a born-again farce.

Senators wield great power in the body. One or two, via the rules of the Senate game, can hold up legislation indefinitely. They can threaten a filibuster, and stop up the works for days, weeks, or permanently.

Senator Jim Demint, who has been slush funding the Tea Party and turning as many Neocons in the House and Senate into Teahadis, eyes Neocon Republican Minority Leader Mitch McConnell’s job.

Tea Party senators are not immune from their own, either.  Marco Rubio, the Florida firebrand, a Teahadi darling, was raised into the cross-hairs of the Club for Growth when he suggested that there was a place for government in American life and that there was a need for some level of social safety net. [5]

If the Tea Party is able to put a few more of its regulars into Senate seats, the kind of gridlock that we saw in 2011, particularly around issues like taxes on the 1% and the phony debate on the debt ceiling, will look like a garden party.

A minority of a minority will be able to hold the United States Government, and our much valued credit rating, hostage in exchange for the most radical fascist restructuring of this country in its history.

This is far more than a simple shift of power.  The changes being wrought by the Libertarian Birchers are disenfranchisement on a monumental scale.

The government of, for and by the People shall be in name only.