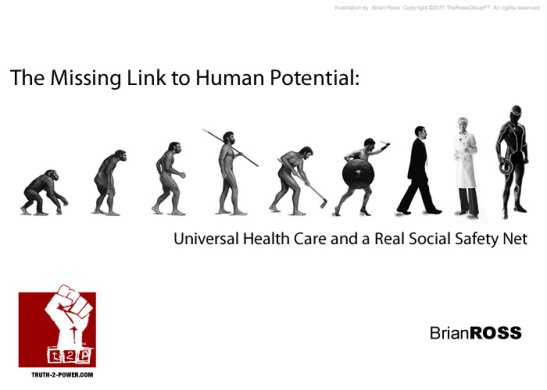 Can we ever climb out of the muck and mire of more than a millennia of Medieval politics?  The lords of the manor are gone, but the CEOs of modern corporate feudalism are little better.   More than a millennia ago, the fear of losing God’s grace and the gateway to a happier hereafter kept us in place.  Today, the fear of the cubicle legions is of the here and now: Lack of universal health care for their family and a retirement free of poverty.  How can humanity advance when our most basic, real Constitutional right to life is not secure?

If we want to advance, we have to think out of the box. To do that, we must first step back for a moment and consider the basics of our social contract with our government.

Over the course of a few dozen fleeting centuries, our tribes have slogged forward.  We barely subsisted off of the land banded together in small warring clans. We gathered in larger and larger nation states, trading culture and tradition for greater prosperity and safety. Today the nation-state is giving way to global corporatocracy which in many ways is forcing us to return to the managerial styles of the Dark Age.

Why do we band together? The most fundamental and basic of our needs: Food, clothing, shelter, reproduction, our health, our well-being and physical safety; The desire for some purpose to our being as a useful part of the community.

America is the greatest expression of the democratic nation state on Earth, a political experiment in balance and harmony of a multitude of tribes from every corner of the globe, with wildly varying beliefs, who live relatively peacefully side-by-side.  Even though we tussle about those freedoms, and they are still far from perfect, our society champions the rights of the individual while balancing the common good of all.

The missing link in our human potential is reducing fear and increasing certainty, not for big business, but for the common man.

Whitney. Edison. Ford. Hughes. Jobs. Just a few of hundreds of thousands of common people with uncommon visions that solved a problem and remade the world.  There could be many, many more. Who can feel secure pursuing that next big idea, though, or serve an underserved need of their community, or simply move to another better job that is more financially and/or personally rewarding when they must fear losing access to quality health care, or losing money set aside by the employee and/or employer for retirement?

We have the freedom to make what we will of ourselves. We believe in the common good, and we should care for those endowed with less, or who have fallen into circumstances that leave their lives vulnerable to poverty, starvation, disease or death.

To reach our full potential, the government must protect that most basic of Constitutional rights, the real right to life of the living. Health care is a right, and an obligation of  the state.

There can be no greater imperative for our government than to remove the corporate Swords of Damocles that hangs over every working American citizen: The right to consistent, high-quality health care when we are sick;

The right to a secure and comfortable retirement without poverty when we can no longer work is a reasonable definition of a lifetime in the Constitutional pursuit of happiness.

For those die-hard Righties reading, that does not mean a hand-out, or a subsidy any more than in the current universe of catch-as-catch-can care.

Few of you complain about the government building and maintaining our roads, bridges, and tunnels. Who argues with the tax subsidy that the government gives your mortgage interest when you buy a home?   We want strong police and fire departments.  We expect our airports, schools and places of business to be safe.

So why have a very small set of New Deal-hating, selfish dead people and their heirs, along with the obvious vested interests of the insurance industry and Wall Street, managed to stampede millions of people into fearing universal health care?

How can a handful of Wall Street investment types, who imploded the economy in 2008, have the balls to push privatization of Social Security after having impaired or destroyed millions of small investors’ life savings?

They lobby for these things because privatized health care and retirement are tools of corporate obedience.  They keep workers in place much the same way that feudal lords kept serfs on the manor promising a better afterlife.

Who amongst us can’t speak to how broken our health care system has become? High deductibles. Lifetime caps. Poor service. Long waits.  Huge inconsistencies in the availability, quality of care, and the price of that care from state to state, even city to city.  Doctors and hospitals are paying whole staffs just to get paid by the dozens of private bureaucracies far worse than the government and wholly unaccountable to the citizens they serve.  At least, on some level, we can hold our politicians accountable for so universally necessary a protection of our lives and well being.

Corporate retirement has likewise been a disaster. Unions fought for a decent living retirement for blue collar America. Much of that was stripped away by underfunding of pensions, companies like GM not worst-case forecasting benefits while negotiating with the unions, and pension funds with bad investments.  Even the white collar 401K plans took big hits through their heavy investments in supposedly bedrock safe investments that turned out to be mountains of funny money.

The Obama Administration needs to think outside of the box.

They would be guaranteed, just as the FDIC does with bank accounts.  The private sector has created all kinds of inventive financial instruments. Isn’t it time that the Treasury get equally creative and come up with some ways to leverage trillions of dollars in retirement and health savings with a higher degree of safety and greater benefit to the common good?

What if we created a United States Prosperity Fund?

Banks borrow money to lend to you and me from the Federal Reserve at cheap rates that right now are about zero.

What if the big commercial lenders borrowed from our retirement and health care funds first?   As interest rates rise, not only will what we pay into such a system stay secure, but it can earn interest that will help cover those amongst us who, for varying reasons, cannot work, or work in jobs useful to society, but which do not pay a living wage.

Instead of money sidelined, money that is set aside now could contribute to the growth and prosperity of the nation, and earns something for the hard-working citizens who put it there.

Corporations, afraid of high dollar medical and pension benefits which make them globally uncompetitive, would be able to bring a lot of jobs back onshore that were sent overseas.

Imagine your world with no fear of you or your kids losing your access to health care. No more games. No more skyrocketing deductibles. You would have the ability to look for a better job, work for a better enterprise, or create your own, without the fear of losing the security for your years when you slow down.

Imagine putting that piece of your paycheck into a retirement account that can’t dry up like a 401K, earns interest and has the back-stop of the United States Treasury?

Provide Americans that level of real life assurance, and it will do for the 21st century in confidence and “certainty” what the FDIC and the New Deal did to recover American prosperity in the middle of the 20th century.

Special thanks to Boston University Dean of Students Kenneth Elmore for putting the most critical piece of the puzzle out there for me. You can still learn quite a bit even at my age by spending a day at a university. – BMR

We’re having a discussion of this idea at TED.com. Join in!