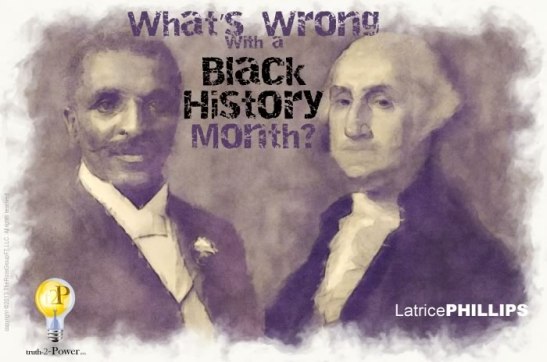 So what else is new?

Charles C. W. Cooke of the Right-wing National Review suggests that Black History Month is contrived and  “over with.”  He believes that black people should get it together and join the rest of American history.  We should stop being so racially divisionist as to require our own month. The cause of the uneven playing field, after all, are Black people themselves.

Affirmative Action, Civil Rights Laws, the Congressional Black Caucus, Black History Month…You know: All of the “special treatment” we Blacks in America get.

Clearly, we aren’t up for the game, so why should the rules be set in our favor? Hell, many white Americans aren’t even descended from slave owners, but from Abolitionists and Union soldiers…should they continue to get the blame too?

The problem with the article is not just the dismissive tone in which Cooke describes his disdain for Black History Month. When this white author describes his young black Malawi-born cousin, it would seem as if he never thought about his skin color before.

He says that she came home from school for the first time and suddenly she was “black,” and an example of her race, despite the fact that she’d left Malawi when she was a baby. I couldn’t help but notice that he is British. The narrative about his cousin took place when he was younger. His remarks seem a little out of touch for someone who comes from a mixed-race family.

My response to those who seem a little bitter and upset that there is a Black History Month is simply this: Slavery happened.

A white majority used slaves to build the agrarian infrastructure of early America and development of the United States for more than a century.  Many whites fought to the death for the institution of slavery.

Not many of us of color  believe for a second that that story will be told properly without remembrance. If forgotten, the most significant social division that is responsible for most of what is still imperfect and wrong with the United States of America gets swept under the rug. No one wants to be history’s villain. Arizona already passed a bill in May of 2010 (HB 2281) aimed at getting rid of ethnic studies, claiming that they “promote resentment or advocate ethnic solidarity over treating pupils as individuals.” [1]

Let’s hear it for ethnic solidarity.  I might even believe that they would teach history as it happened instead of through the rose-colored lenses of the  white “winners”, had Arizona not just proposed and passed the whole “papers please” law, completely aimed at racially profiling Latino’s in the state. The law is aimed at illegal immigration in theory. In practice it is more racial profiling and bigotry at its worst.

Should Latinos in Arizona trust that most of their history wouldn’t be wiped away by the choices some educators either make themselves or are forced to make? Perhaps they will have to wait until National Hispanic Heritage Month in September, which Mr. Cooke will probably be against as well. If Latino parents lose their Hispanic American history, it doesn’t take a lot of generations for some history to be lost to the ages.

Blacks and Latinos have not been the only ones to find themselves short of a turn in history classes and books. The Irish immigrants had it rough when they got here too. The Klu Klux Klan (KKK) wasn’t just opposed to people of color; They looked down through their pillowcase headdresses at Irish Catholics in a Protestant country as well. Perhaps in March, Irish-American Heritage Month should also fade into the history books.

There are a lot of parts of a American society that have their own month: Woman’s History Month, Asian Pacific Heritage Month, Gay and Lesbian Pride Month, American Indian Heritage Month and Universal Human Rights Month.  There are also days to remember everything from the Holocaust to our troops who fought abroad to human rights and global warming and  hard working secretaries.

It’s not as if all of us who find ourselves with a celebratory month are purposely being divisive and separatist. There was a time when these histories would not be told in schools, in the media, or even at home. Accomplishments would go unsung and the role that all of us play in history would be erased. Black History Month isn’t about being separate; It’s about finally finding ourselves in equality.

Children learn about George Washington and George Washington Carver and his amazing scientific contributions and accomplishments. This doesn’t serve to diminish the father of our country, but bolsters our belief  that we are in fact created equal, that each legacy deserves air time, not just the the history of the American people with the lighter skin tones.

Black History Month is not about fostering racial resentment. None of these months are about fostering any division or resentment; It is about knowing where we come from, and how all of America has been reshaped for the better by becoming slowly more inclusive.

If there are Americans who feel some sort of “guilt” when the story is told, then perhaps they should ask themselves why that is.

This information is knowledge. Knowing where we have been in our history, and where we plan never to return. Knowing who made change possible inspires us to change more.  That knowledge is the power to improve our society, not diminish it.

I suspect that those who don’t want us to change America for the better already know that little tidbit.

This is a "what's going on in the world" type of blog. Any and everything that interests me could make the cut! Politics, current events, fashion, television...we'll just have to see how I'm feeling that day.
View all posts by LPB →

2 comments on “What’s Wrong with a Black History Month?”