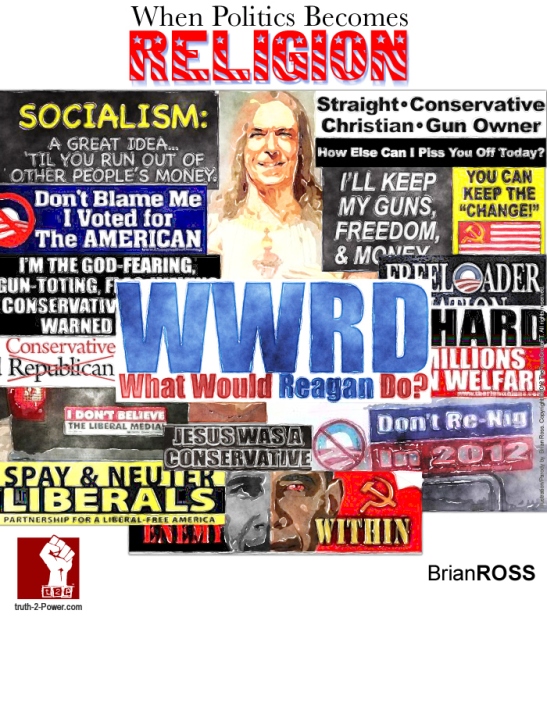 “I Don’t Believe the Liberal Media”  is a bumper sticker, a mantra, and an ignorant badge of honor and a disturbing trend: Ignorance is Right-hip.  Birtherism, and baseless claims of ‘voter fraud’, and ‘fixed’ jobs numbers are part of the rising alternate reality of Republican politics.  The fusion of religious zealotry with blind political ambition is a dangerous new hybrid that threatens the fabric of this republic’s great democracy.

What we are experiencing is the primary reason that the Founding Fathers created a Constitutional separation of church and state.

History and poli-sci classes often cite the ‘whose religion’ argument to explain why we have such a separation.  Many sects escaped British persecution. Which one would be the “official” state religion?

It was sold to the early state governments that way, but the motivation of the Framers for keeping God out of government was far more fundamental to the core of what freedom really is.

The Framers were steeped in a religious radicalism that rejected the Papacy in Rome, the Anglican Church of British royalty, and even some of the more established protestant churches of the day. They also embraced and synthesized a secular humanist philosophy of Hobbes, Locke and Rousseau into the radical concept that political power begins with the average citizen, bottom-up, not from God, top-down.

Jefferson believed that the purity and nobility of both religion and politics were misused by lesser minds for personal gain.  In a letter to William Short in 1820, he wrote:

“My aim in that was, to justify the character of Jesus against the fictions of his pseudo-followers, which have exposed him to the inference of being an impostor. For if we could believe that he really countenanced the follies, the falsehoods and the charlatanisms which his biographers father on him, and admit the misconstructions, interpolations and theorizations of the fathers of the early, and fanatics of the latter ages, the conclusion would be irresistible by every sound mind, that he was an impostor…

“[Jesus’] object was the reformation of some articles in the religion of the Jews, as taught by Moses. That sect had presented for the object of their worship, a being of terrific character, cruel, vindictive, capricious and unjust. Jesus, taking for his type the best qualities of the human head and heart, wisdom, justice, goodness, and adding to them power, ascribed all of these, but in infinite perfection, to the Supreme Being, and formed him really worthy of their adoration…

“I say, that this free exercise of reason is all I ask for the vindication of the character of Jesus. We find in the writings of his biographers a matter of two distinct descriptions. First, a groundwork of vulgar ignorance, of things impossible, of superstitions, fanaticisms and fabrications. Intermixed with these, again, are sublime ideas of the Supreme Being, aphorisms and precepts of the purest morality and benevolence, sanctioned by a life of humility, innocence and simplicity of manners, neglect of riches, absence of worldly ambition and honors, with an eloquence and persuasiveness which have not been surpassed. These could not be inventions of the groveling authors who relate them. They are far beyond the powers of their feeble minds. They shew that there was a character, the subject of their history, whose splendid conceptions were above all suspicion of being interpolations from their hands.”

Jefferson made a distinction between the purity of the message of Jesus, and the propaganda and personal politics of the messengers who have spoken for him since.  He made that same distinction in discussions of what American politics should be.

He and the Framers also believed in a country that would be governed in a manner consistent with the purity of the Jesus that Jefferson discerned through his readings of scripture: “sanctioned by a life of humility, innocence and simplicity of manners, neglect of riches, absence of worldly ambition and honors, with an eloquence and persuasiveness which have not been surpassed.†”

The first men of the United States House and Senate, within the decades of its founding, were steeped in that belief.

Granted, many of the patrician senators were quite wealthy, but they were not in government for the money, or a job lobbying the government after they retired from political life. Most longed to return to a private life with more simplicity and peace.  Service to the government meant service to the country, the common man and the common good. It was the highest honor. That thinking also permeates the United States Constitution.

One of the major reasons to have a separation of church and state is to keep political discourse rooted in the real and the rational, the rights of all men†, not beliefs, however well intended, that are vested in vulgar ignorance, things impossible, superstitions, fanaticisms and fabrications.

In principle, the United States of America was not only the first free secular state where “the people” engaged in a social compact to take care of each other not by religious dictate, or fear of the wrath of the Almighty, but because it is simply part of a healthy social order where all people are created equal†.

These core principles of our Constitution and our daily life, though, have been under attack from well funded fundamentalist Teahadis doing the bidding of their Libertarian backers.

They warp talk of “patriotism” and the Constitution to their political ends as badly as they warp their religious views to suit their selfishness (Shhh… Jesus was a HUGE socialist…).  They are attempting, as they did in the late 19th century, to make the United States that top-down, God-first nation that it never was designed to be.

It is the lies of feudal Europe and Southern slavery visited upon the whole nation, sold to a rising tide of proudly ignorant people by true believers, guys like Frank Luntz and Grover Norquist who peddle a story.

Humans, throughout history, have loved a good story. Stories are the bindings of clan culture.   The ones that die out with their politics and cultural beliefs become myth. The current ones become religious dogma. One person’s faith is another’s fairy tale.  Be it visions of Valhalla, or a wager with the Greek Gods have put a shiny gloss over generations intimidation, brute force, hundreds of millions of deaths and shameless lying to alleged higher purpose.

The current narrative has created a political second coming, the GOP Jesus of Ronald Reagan. Just as with the historic Jesus, Republican Jesus Reagan is used to sell political sewage that even the Gipper would blanche at.

It has a dogma: Liberals and socialism are the Devil.  Jesus, guns and freedom are good. Regulation is bad. Greed is good.

Parents who don’t like their ignorance challenged home school their children to fill their head full of alternate truth. Ignoring reality, or just making your own, is easy when you’ve been schooled that way since birth. When news, statistics, science, or history disprove a “belief,” Republicans make up their own. They have their own news. They have their justifications of their separation from reality and the rest of society. It does not fit their beliefs, so it does not exist.

The other big sociological driver of this trend is that mankind has a high tolerance for misuse and abuse.  We tend to abdicate power easily, and become afraid of those who take it.  It takes a lot to get people angry enough to stand up to tyranny.

In our nation’s history, that level of public outrage has happend only four times:

Historically, power, money and top-down control of the ignorant masses has always trumped education, reason, and enlightenment. Even in our “educated” society, we are slipping backwards into the benighted bliss of the believer.

This proudly held epidemic of ignorance has a geography.  No place is denial a deeper river than in rural America, the bedrock of GOP power.  When you fuse the farm faithful in their small homogenous hamlets, well schooled in fear of the Almighty, with a Republican politics that generates a fear of the “other,” the culturally different, the sexually different, the racially different, the educated, the urban, you have an almost incurable cancer on the body politic that has been the precursor to civil and world wars.

E Pluribus Unum, literally, “We are many, one” has become “E Pluribus Duos”

Either the American fascism, a term not lightly used, will succeed or Oreo America is coming. The reason and enlightenment of the Founding Fathers’ great experiment in human enlightenment  and self-governance is sinking into a sea of fear and ignorance.

† The theory has been purer than the practice as the Puritanism and Baptist faiths have driven much of the extreme Libertarian and Neocon thinking that has branded minorities, LGBT people and women as “lessers”.  Religion was used by the Southern Baptists in the same way that feudal Europe used it. [1]

5 comments on “When Politics Becomes Religion”