Florida Should Worry Romney and the GOP: Miles from Momentum and Mandate 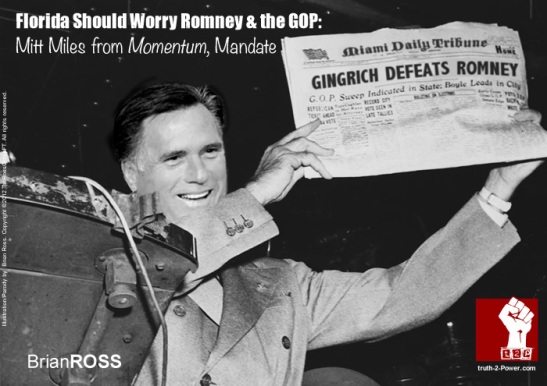 Mitt Romney got the headline from Florida that he was seeking out of the New York Times: “Romney Wins Big Over Gingrich.” That’s one way of looking at it.  A very shallow, reflection from the wading pond sort of view.  Diving the depths of the numbers, though reveals a different story: The whole GOP pack is failing; Romney still struggles, and is miles from a mandate.

Remember that Florida should be a Romney stronghold. He narrowly lost to John McCain in that state’s 2008 primary. So his numbers in this election are revealing.  Let’s dive into the depths:

Lay of the Political Land in Florida

The political landscape of Florida is much tighter than it is in many other states. According to the Florida Division of Elections in their December 2011 report, 36% of active registered voters are Republicans, 4,061,224 of the 11,236,161 who were able to cast a ballot in the Sunshine State this election year. The total voting base shrunk in Florida from 2008 by 1.5% and the Republican base has decreased about 1.1% as well. [1]

Why is that important?  2008 was a bummer of a year for Republicans. After eight years of George W. Bush, two wars, terrorism still at high threat, our standing in the world at near all-time lows, and an economy tanked by Wall Street to a level not seen since the Great Depression, there was not a lot to be enthusiastic about for GOP primary goers. The Clinton-Obama race and the lackluster pack of 2008 candidates further sucked the enthusiasm oxygen out of the GOP primaries in ’08. 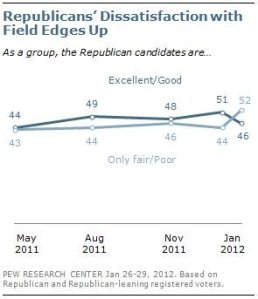 It should continue to be troubling to candidates and the party brass that, in the mandate department, a bad trend for the Republican party is continuing.: GOP voters are not turning out in 2012 primaries.

From Iowa to New Hampshire to South Carolina, and now to Florida, Republican voters don’t like their candidates. In an improving economy, they also don’t see the tidal wave of anti-Obama outrage that the GOP-backed media have been beating their drums about for months.

The PEW Center also is documenting this in their study of GOP voter satisfaction. Republican voters ranking their candidates fair or poor are now up to 52% in January of 2012.  That’s the highest they’ve been since November, and the first time in this cycle that the negative view outpaced the positive view.

Mr. Romney beat Mr. Gingrich in Florida by 14.5%.  That’s handy enough to have the NYT gushing like a school girl, but for Romney, or any candidate in the GOP pack, to claim something of a mandate to take into the general election, the candidate who becomes the party’s standard-bearer would have had to come in with a win in the 20%-22% over the second place finisher, and show solid results in counties less friendly to them.

That would have been easier to pull off had Republican voters shown up.  The county-by-county breakdowns of Florida are telling about the growing divide in the party’s politics.

You have to make adjustments for early voting, where Romney spent millions over the last couple of years working an expensive state to operate in. That nullifies a good part of the momentum from the South Carolina primary.

The demographics of Florida Republicans are also vastly different. The large urban areas in the Southern part of the state have more fiscal conservatives and fewer evangelicals. The Cuban-American vote in Miami is all about who will stand toe-to-toe with the Castro regime.

In the large Southern urban areas, Romney destroyed Gingrich: Miami-Dade: 56.4%;  Palm Beach: 48.8%.  Santorum and the other candidates weren’t even much of a factor.

When you get to the large cities of the redder parts of the state, the tale changes. Yes, Romney still beat Gingrich in Pinellas County (Clearwater area) by 51.75%,  and adjacent Hillsborough County (Tampa) by 48.8%, but Santorum was a major factor in those races, garnering 17% of the vote.

In the the more rural parts of the state, which demographically more in line with South Carolina in evangelicals and Christian conservatives, Gingrich and Santorum wiped the floor with Romney.

The lower voter turnout though, hit particularly hard in these counties, suggesting that those grass roots voters that the GOP badly needs in the general election may not turn out in the numbers that they need.

The big tell of yesterday would be Orange County, Florida (Orlando). Romney beat Gingrich by 38.5% there. Lose Santorum and the throw-away vote, and adjust for Romney’s ground game that has been running for years, and you have close to a dead heat. [1]

That does not mean that Gingrich will win the nomination. It does mean, though, with every state where this divide continues, and Republican turnout is flat to down from 2008, that the candidate who does prevail, most likely Romney:

What was clearly missing in yesterday’s contests was the vast Teahadi wave that swept through even the bluest of blue counties in 2010, bringing in the hard-right radicals of the Florida state government, Marco Rubio to the senate and the bizarre Palm Beach/Broward representative, Allan West.  No honking trucks clad with banners. No sign wavers on corners. In Palm Beach, Broward, and Miami-Dade, you would have barely known there was an election if you didn’t watch TV.

Florida has been a lynchpin state to victory in past elections. It has a higher percentage of Republicans than exist in most states, and a 20% “Independent” base that leaned heavily GOP in 2010.

If the results of the 2012 Republican primary are any indicator, and turnout remains the same or gets worse, the winner of yesterday’s election was Barack Obama in November.

4 comments on “Florida Should Worry Romney and the GOP: Miles from Momentum and Mandate”