America Held Hostage by the Tea Party – Rewriting the U.S. Constitution at Gunpoint 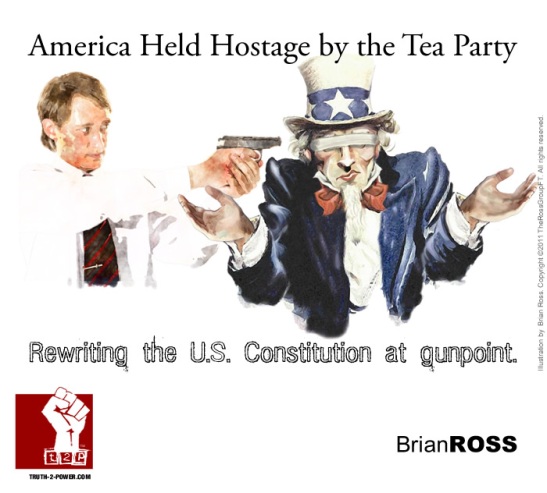 “Your Constitution or your life!”

The Tea Party Teahadis are trying to radically rewrite the government in their image, using the drop dead date of the debt disaster as their weapon. While the mainstream media turns the debt ceiling mess into a numbers tennis match, they are missing the core of what is at stake:  The Tea Party’s wholesale rape of the process of governance is the core stumbling block in the current budget fight.

The Tehadis see this as their shining moment to remake government in their own image.  They want to cram a Constitutional Amendment through Congress in less than ten days. Their blind moral high ground trumps fiscal responsibility and the protection of millions of Americans livelihoods, lifetime savings and their futures.

Thousands on Twitter noted last night at no time in Mr. Boehner’s brief address did he answer Mr. Obama on the rationale for preserving Bush era tax cuts for corporates and the wealthy. Even as updated polls from CBS this morning show 71% of Americans believe that the GOP is wrong on this issue.

Republican lawmakers past, queried by the New York Times last night, where equally clear about doing a deal for the good of the American people. Most thought what Mr. Obama put on the table was more than reasonable and generous:

“‘If that means more to you than getting a plan and stabilizing this economy, you’ve really got to wonder why you’re there,’ said Alan K. Simpson, a former Senate Republican leader who was a co-chairman of the bipartisan fiscal commission Mr. Obama set up last year.

“If I were there,” said Mickey Edwards, a House Republican leader in the Reagan and first Bush administrations, “I would say, ‘My God, declare victory.’ ”

The ever-happy to gloat Mr. Boehner would love nothing but.  He lacks the votes to gloat.  The blood oaths that Republican Congressmen have been forced to sign on taxes and other issues of the extreme Right, and the rabid dogmatic base that has evolved lies at the heart of why our phony financial crisis continues.

The Teahadis are in control of government because they have demonstrated that they can undermine more moderate Republicans in primary contests which have to be won to get to the general electorate, which is more moderate.  This has sapped the will of most of Boehner’s usual suspects to defy the Teahadis and vote with Democrats to come to a compromise.

The majority of the media is doing its usual job of trying to turn the whole ordeal into a simplified spitting contest.  It sells papers, but when you strip away the nuance of the debate as a power struggle within the Republican Party itself,  it loses the substance of what is really going on.

If you listened to both speaches carefully last night, and took it all in, what you saw was clear: Mr. Obama and Mr. Boehner were not far apart in a deal that would have found trillions in cuts and would have brought the money being bled out of the Treasury by the Bush tax cuts back into the revenue stream to help restore fiscal order at the Treasury as well.

Mr. Boehner could not close the deal because he could not bridge the difference between a $600B tax hike for the rich and a higher $1.2T tax hike that the so-called Gang of Six Senators had proposed.  Mr. Obama, also needing some air cover with his party, sought to move the number between Boehner’s and the Gang of Six to win Democratic votes. Boehner could not sell the near complete stripping of the Bush tax cuts to the Teahadis, so he walked and went right back to their extreme stance.

The ever-slick Speaker’s political calculation was that he stands a slim chance of survival in his job by playing to their power with the base, rather than no chance against the grass roots if he angers that vocal minority and stands up to govern the country, as is his job description.

While there are indications that the deal would have sold to disgruntled liberals, not wanting to take the blame for financial collapse, the more insane Teahadis were not biting.

They live in a distorted world outside of the reality curve.  As I mentioned last week in “Cap, Cut and Balance – Tea Party “Common Sense” is Constitutional Nonsense,” the House proposal that passed their body, which calls for a constitutional Amendment to balance the budget before the debt ceiling could be raised, is just plain nuts.

Chris Matthews was able to draw that out on Hardball last night, in an interview with Senator Mike Lee (R-Utah) which ThinkProgress digested, Lee admitted that he and the other Teahadis are extortionists.

CHRIS MATTHEWS: How many days do you think we have, on the outside, to get this debt ceiling through before we have a problem? How many days?

MATTHEWS: Okay, in ten days you want to change the United States Constitution by two-thirds vote in both houses? That’s what you’re demanding.

LEE: Yes. If possible we can’t change the Constitution just in Congress but we can submit it to the states. Let the states fight it out.

LEE: Yes. That’s exactly what I’m saying and I’ve been saying this for six months.[1]

This kind of blackmailing minority factionalism is not unprecedented in U.S. history. In the early days of the Republic, this was exactly what the Founding Fathers worried about. It is why they established a patrician Senate appointed by the states.  At the time, it was made up of educated, hand-picked elites who understood that governance came first.

The problem today, with our elected Senate, is that the same irresponsible, radically extreme people that could run in either party are able to bypass the checks and balances set up by the Founding Fathers.  The “vote the bums out” sentiment of the 2010 mid-term installed extremists who are dogmatically unable to come to the middle and form a consensus.

The Teahadis bill being restructured in the House for another vote, calls for bypasses to the traditional checks and balances, including more recent readjustments like the Senate filibuster, which Republicans were using just months ago when it favored them to stonewall Mr. Obama.

On the basis of how radically the bill is written for procedure alone, it will fail because the saner members of Congress won’t want to set the precedent of allowing radical minorities this level of power to hold the rest of the government hostage.

Mr. Obama’s appeal for you, the voters, to hit the Tea Party hard at the phones and on email, may be the only way to up-end their intransigence.  If they realize that there will be a massive backlash, something which should not surprise them given the polls, perhaps they will seek to retain some level of power by making a deal, and taking credit for pushing the government that hard that it did something.

It would be a victory for them, to be sure. They want total domination though, which suggests that both the zealots, and the American public, are headed for a big loss.