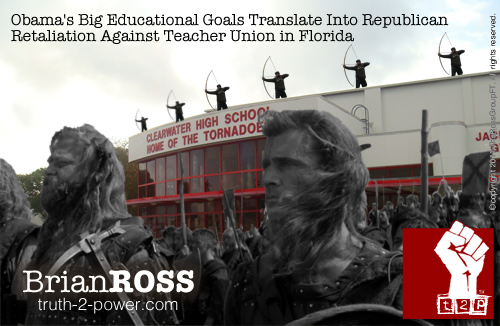 Be careful about setting up broad-stroke directives, President Obama. Politicians and bureaucrats of less noble intent may use them poorly, as is the case here in Florida.

The Republican-controlled government, egged on by a the hard-right Florida Chamber of Commerce, has turned your call for “accountability” in education into a jihad against teachers and their union which will benefit no one.

Florida Senate Bill 6 passed about a week ago, and House Bill 7189, its companion, is speeding through the State House.

Yes, from those same whacky politicians who gleefully carried out the No Child Left Behind (NCLB), or as I like to call it, the “No Child Left Untested” Act, we have teacher pay bills that threaten our educational system moving through the legislature in Tallahassee faster than a congressional pay raise.

State GOP leaders are positively skipping about what they see as a federal mandate from the President to strip the teachers of their tenure and bust the unions’ control of public education.

Mr. Obama decided, rather than shelve the NCLB, to embrace it and add:

“Let me be clear: If a teacher is given a chance, or three chances, but still does not improve, there is no excuse for that person to continue teaching,” the president said. “I reject a system that rewards failure and protects a person from its consequences.”

The result, in states like Florida, has been a swift move to take that mandate and use it. The Tampa Tribune’s Catherine Wittenburg reports:

TALLAHASSEE – Powerful business groups and the state teachers union collided in debate Monday over politically charged legislation that would make it easier to fire experienced teachers and base more of their salaries on student test scores.The battle between the two factions mounted over the weekend as the union and Florida Chamber of Commerce hit the airwaves with political ads. Teachers and parents have likewise deluged lawmakers with telephone calls and e-mail in a coordinated attack on the measure, which would eliminate traditional tenure for teachers hired after July 1, and base pay increases largely on student test-score gains.

The bill already has passed the Senate and is barreling through the House toward final passage.

The bill proposes to tie teacher tenure and pay to performance on Florida’s Comprehensive Assessment Test (FCAT). Excellent teachers will get merit pay increases starting in 2014. Underperforming teachers will not get raises, and in some cases, can lose their tenure, or be fired altogether.

Local Fox Noise outlets trumpet the change as a new day in education that will hold those teachers, who, after all, are the cause of all ill in our schools, accountable.

The teachers unions object for a whole slew of reasons, from a lack of funding to provide additional training to teachers on the borderline, to the obvious attempt by the GOP to bust the union. Some school boards are objecting as well, as this represents a huge power grab by the state of Florida to remove control of schools from local authority.

A system that rewards failure is fundamentally flawed. Using performance-measuring programs like the FCAT or other NCLB testing to get there though is a colossally stupid idea.

The FCAT allegedly tests student knowledge, but it cannot begin to assess which of the many forces that impact the life of a child helped them to earn whatever they scored on the state test.

The teacher is only a part of the educational puzzle. Florida, along with its incredibly wealthy cities and suburbs full of over-achievers, is also a state full of new immigrants, and endemically poor rural and urban communities.

The public system thus caters to a wide range of students with very different lives outside of the schools.

There are a lot of kids who do not have “Leave It To Beaver” home lives where one parent stays home, bakes cookies, and dad comes home to pop on his smoking jacket and settle down with the family for the evening.

As hard as it is for good parents to comprehend, there are a subset of parents who don’t really care what kind of education their kids get, or where their kids are, or what the future holds for them. They don’t do what the folks over at the Chamber do for their kids.

Parents who work two or three jobs to make ends meet do not have time to sit down with school books and help their kids through them. Many can barely make parent-teacher meetings.

Kids from new immigrant families who speak Spanish and Portuguese and Patois and Creole and have entered our public schools at an age where mainstreaming, another pet Republican educational “idear,” is difficult to achieve, in part because, out on the street, many think that there is little or no need for them to use English to get along in the world.

We have kids whose parents have allowed the XBox and the Internet to add to the TV’s mind-suck at the expense of studies.

We also have a lot of kids whose ability to learn is impacted by genes or environment, not top-notch classrooms. From ADD to malnutrition to the huge numbers of children being identified with spectral autism, there are forces which impact FCAT scores which are bigger than the teachers tackling them.

Hours out on the street, hanging around the mall, or locked into a video console, rather than doing homework affect educational performance as much as teachers do. This is an indisputable fact.

A teacher cannot cure a broken home, turn off the TV, or pay for the therapy or medication for a learning disability.

Even when problems are identified by teachers, they are often turned over to a system without the resources to help kids cope with all of the other variables that their lives bring to their education.

Ask teachers in below-A-rated schools what they need most, and many will tell you that they need after school programs to fill in the cracks, and better assessment of students learning abilities to help provide them with the support that they need and deserve.

Kids need a safe place off of the streets to do their homework, to get mentoring from adults who take an interest in their lives, needs and aspirations that may not be available to them at home.

Communities need specially trained after-school educators who pick up the ball that so many parents cannot, and provide that additional support.

The limited number of Republicans who bother to acknowledge the realities of a world where there are real problems that the schools cannot solve generally look to charities and religious organizations to fill that void.

Churches, the Y and the Boys and Girls Clubs can provide a safe place for kids to be, but most are not well-tooled to continue the educational experience after-school. Too often the dogma of their organizations also prevents them from helping with a secular curriculum with which many wholeheartedly disagree.

These organizations have very limited resources, far more so than government.

A lot of kids don’t belong to a congregation or have parents who don’t have it together enough to enroll them into after school programs.

It is easier to campaign politically on the new books, paint, and new teachers that you lobbed into the broken system that put lipstick on the corpse. No one in Tallahassee is taking the recommendations of the people in the trenches seriously, and providing the funding to heal the spectral problems that afflict education and impact standardized testing.

After-school programming is most badly needed at the teen level, where the failure rate in school tends to accelerate into the high drop-out numbers that we see.

The No Child Left Untested Act has been its own disaster. Teachers, particularly at schools with marginal “grades” for performance, spend a lot of time teaching to the test, rather than educating their students. Passing the FCAT and really grasping the subject materials are two different things.

Republicans, and the bureaucrats that they allege they want off of their backs, agree on one thing: They love yardsticks.

They both use this standardized testing to be able to demonstrate improvements which lead to more money for the schools from the state and the feds. They use this “numbers racket” to trumpet career promotions within the school district, to get elected to boards of education, or run for state or federal office.

Millions of children’s educations are thus processed Scantronically and pot-boiled down to campaign sound-bites:

The FCAT arguably measures student performance, but it can never measure teacher performance, because of all of those other variables that affect who that student is, and how they learn.

Once again President Obama is good with the broad brush, but the people under him are not ready with the comprehensive programming to help translate worthy ambitions into the real world.

The negative response to this legislation from educators, parents, and teachers is overwhelming, which is why the legislature in Florida has these Bills on the sneak-it-by fast-track.

If improvement in education is the goal, then improve the whole system. Tacking teacher pay to the FCAT changes things for the worse. Who wants to take a job where they will have their earnings or career on the line when they don’t have the tools to solve problems and they can’t address the rest of the child’s life that drags down test scores?

The Florida legislature, and others, should provide the additional support to teachers’ continuing education. The states and the feds should provide school districts the money, and the building space, and the additional after-hours educators to fill in the cracks where society is letting down so many of our students, or start holding parents legally accountable for keeping their minor children at home and in front of their educational tools.

After all of that is done, in exchange, the unions should agree to a fair and binding form of testing teacher performance with the local school districts that takes into account the teacher’s role in the educational process. The FCAT is definitely not that yardstick.

The answers to improving education have to be holistic, and local. President Obama’s good intentions of setting a tone unfortunately will not translate into more success for students, teachers, or schools until we deal with the whole puzzle, and not just this or that piece.