Kids, Stay Away from the President… He has.. SOCIALISM!! 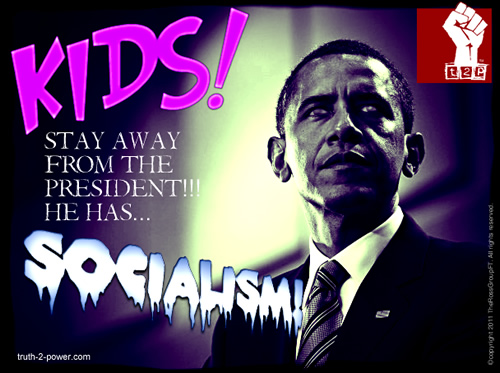 Just when you thought that Fox News could not try harder to divorce themselves from any shred of credibility as a news organization, comes the latest amplification of hate speech against President Obama. Apparently the President of the United States of America is not fit to speak to our kids at in a public school webcast on education because he has contagious SOCIALISM.

Here is my contribution to the hysteria:

Of course, that is not nearly as extreme as Fox News’ drum-beat to burn into the brains of right-wingers the notion that President Obama is a dangerous socialist.

The propaganda ranges from this “news story” where D.C. Managing Editor and VP of News for Fox Bill Sammon briefs us on the potential dangers of Obama using a speech to kids to “further his agenda”:

To the completely over-the-top histrionics on the O’Reilly Factor:

Usually you take the Republican version of Comedy Central with a grain of salt, but when elected officials join into the fray, you know that there is a concerted effort afoot by the back-rooms of conservative power to stampede the easily-swayed into motion against the White House.

The Right Wing has been looking for something that gains traction with their base, which, as we saw during the campaign, was already terrified of the skin color of the President.

No self-respecting Socialist whom I could find making comment likes Barack Obama much.

Socialist organizer, Billy Wharton, who is pretty typical, pointed out in a March 15, 2009 opinion piece for the Washington Post that Mike Huckabee, Sarah Palin and John McCain have more to do with the revival in interest in the Socialist movement than does Barack Obama:

Whom did we have to thank for this moment in the spotlight? Oddly enough, Republican politicians such as Mike Huckabee and John McCain had become our most effective promoters. During his campaign, the ever-desperate McCain, his hard-charging running mate Sarah Palin and even a plumber named Joe lined up to call Barack Obama a “socialist.” Last month, Huckabee even exclaimed that, “The Union of Soviet Socialist Republics may be dead, but the Union of American Socialist Republics is being born.”

Wharton goes on to point out:

“The funny thing is, of course, that socialists know that Barack Obama is not one of us. Not only is he not a socialist, he may in fact not even be a liberal. Socialists understand him more as a hedge-fund Democrat — one of a generation of neoliberal politicians firmly committed to free-market policies.”

Governor Tim Pawlenty is trying to out-do Sarah Palin for the whack-job Right’s vote. According to CBS News’ Blog, Political HotSheet, the Minnesota governor angling at a 2012 presidential bid said:

“At a minimum it’s disruptive, number two, it’s uninvited and number three, if people would like to hear his message they can, on a voluntary basis, go to YouTube or some other source and get it,” he told reporters at the Minnesota state fair, according to CNN. “I don’t think he needs to force it upon the nation’s school children.”

“The idea that school children across our nation will be forced to watch the President justify his plans for government-run health care, banks, and automobile companies, increasing taxes on those who create jobs, and racking up more debt than any other President, is not only infuriating, but goes against beliefs of the majority of Americans, while bypassing American parents through an invasive abuse of power,”

While guys like this look pretty stupid, even in the hands of cream-puff journalists like Anderson Cooper:

The hysteria gains traction, even though, as education secretary Arne Duncan pointed out to the Associated Press, Obama’s message to students was much more about the basics. Obama will urge them to stay in school, and participate both in improving their education, and in improving the world around them.

It is a simple message which will never get heard in large swath of the country where fear and ignorance is once again being whippped into a frenzy to cater to the same racism that plagued the campaign. Just as movie “aliens” of the fifties were code for Communist fears, the Republicans are leveraging fears of “Socialism” against a sitting president.

In a form of disrespect never heretofore seen for a sitting President of the United States, schools in Minnesota, Wisconsin, Texas, Missouri, Virginia and most amazingly, Obama’s home state of Illinois, are opting out of the webcast.

Not all Red State strongholds are going through Black, er Red scares… In Arkansas, many educators are not knuckling to Right-Wing political pressure, as this local news report demonstrates.

Obama has had a little help batting back the smear campaign from, of all people, Bill O’Reilly. Yes, thatBill O’Reilly, possibly in response to one of Roger Ailes internal Smear-O-Grams, actually broke ranks with the Fox News machine, and even the spin of his own “O’Reilly Factor” and wrote a piece in the August 9, 2009 edition of Parade that says that Barack Obama has a lot that he can teach children about the value of education and success.

“There is just a group in this country that is unable to get over the election we had last November.”

Precious few of the Dems in Congress, or party chairs in the states boycotting the speech are coming to the President’s aid.

That is very troubling, since this whole school brouhaha is an obvious smoke-screen to keep President Obama and the White House off message on the health care speech, which will also air on Tuesday.

It is also disturbing because it shows, how, and where our politicized schools are endorsing ignorance and fear rather than knowledge and enlightenment. It is bad enough that George Bush dumbed down the public schools into the No Test Left Behind system.

Nearly a quarter of the school year, more in the case of poorer states that score badly, is reserved for learning how to take a state No Child Left Behind test, and pass it. The content, knowledge base, is usually secondary, to retaining factoids that show, like some trained seal, that the student can retain information, not what they do to think about it. It has turned the system, instead of focusing on the trees, students and their needs, into a behemoth which only measures whether the forest has been presented with information that it is green. If it can say it is green, it gets an A rating.

So when schools, which already are highly politicized by this process, start knuckling in to Fox-fed hysteria as part of a campaign to derail public endorsement of the health care legislation, you have to ask what is next?

If the oil lobby’s tax breaks are threatened, will Fox advocate burning books, what few are left in school libraries, to deflect attention from that agenda?

Will the mindless zombies in the education system who either agree with this hysteria or endorse it as part of their personal political leanings continue to use their school systems as a political weapon?

It is not Barack Obama that is politicizing schools. He is doing what the head of this great country of ours should be doing: Leading by example, and encouraging excellence from our children. For anyone to extrapolate a questionnaire that includes “How can I help the president?” to be a politicization of the schools has seriously lost touch with reality.

It is the Republican Party, their mouthpiece Fox News, and the officials of these school districts knuckling to such third-rate street thuggery that should be held accountable.

If you want to do something to put an end to the politicization of our schools, contact the Superintendent of Schools in each of these states and let them know that they should be embarrassed for playing along: