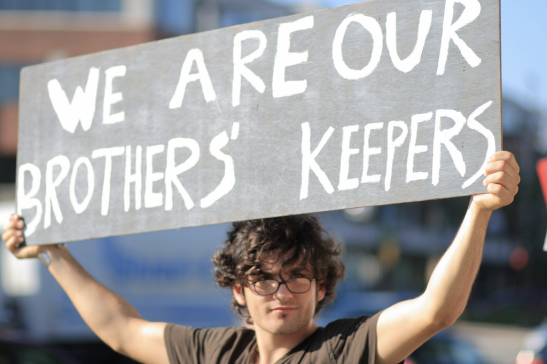 There is a real “right to life” that has nothing to do with abortion. Universal access, not just to “affordable,” but the best free healthcare for all American citizens is a fundamental human right, protected by the Constitution.

The Declaration of Independence spells it out:

“We hold these truths to be self-evident, that all men are created equal, that they are endowed by their Creator with certain unalienable Rights, that among these are Life, Liberty and the Pursuit of Happiness. That to secure these rights, Governments are instituted among Men, deriving their just powers from the consent of the governed;”

When you are born, or you become a citizen, you enter into a social contract with your government. Without good health, life is impaired, threatening liberty and impacting the pursuit of happiness. Healthcare is a foundation to your freedom. You cannot have liberty or happiness without good health. The World Health Organization recognizes that the highest standard of health care available to a citizen of any country is a fundamental human right.

The federal government and its supporting state governments, not insurance companies, private corporations, non-profits or wealthy billionaires, are the guarantors of your life, health, safety and prosperity.
Government has four basic missions:

GOP leaders carry on about a “strict” interpretation of the intent of the framers of our government. Let’s be strict then: Healthcare is an inalienable basic human right of all Americans that should have become an amendment to the Constitution like suffrage or the right to bear arms.

The Founding Fathers believed in individual liberty, but also in the common good. Government was established as a means of collectively protecting it. The billionaires of the Reagan Era believe that protecting the individual, not the collective good, is all that matters.

Why is it, then, that the Affordable Care Act (ACA) has become Ground Zero of the fight for the soul and direction of the United States?
The billionaire class that funds the Republicans’ transformation of government to suit their world view sees your health care as a threat.

Social Darwinists believe that a few in America are the “chosen” because their genetic superiority and their Christian absolutism makes them the wealthy and prosperous of the world.

It is no different than the kings who governed by Divine Right, the notion that god backstops the exploitation of 99% of humanity to elevate the chosen few to rule.

You’ve probably heard the phrase “survival of the fittest.” Natural selection culls out the strong, and continues their genetics, and kills off the weak.

It’s the answer to the question that so many of you ask: Why do the Republicans want to take away healthcare from 20 million people?

They see keeping millions of Americans out of the insurance system as a form of herd-thinning that uses access to care as a means of culling out the “weak,” those who are poor, unlucky, physically flawed, or mentally or emotionally incapable of caring for themselves.

How could Republicans Senate majority leader Mitch McConnell, Speaker of the House Paul Ryan, and most of the Republican legislators who kept Obamacare’s Medicaid funding out of 20 states, which only hurt the working poor further, be so cold-hearted?

It is a belief sold by author Ayn Rand, and very popular with Ryan and others in conservative politics, that the true moral purpose of a life is the pursuit not of collective, but individual happiness. They believe that the Constitution exists solely to protect the individual without regard to the common good. Objectivists, like Speaker Ryan, want to strip away Obamacare, Medicare, Social Security.

By their school of thought, if you, as an individual, can’t hack it in society for any reason, there are no excuses. You’re supposed to get sick and die because you are inferior to them. They, as the selfish objectivists, owe you nothing, because there is no such thing as the “common good.”
The “fittest” survive because they pull themselves up by the their own bootstraps. Health insurance is a reward for their superiority because their work pays for it.

This is why, even though the Right talks about “repeal and replace” they have not floated a real replacement for the ACA. They don’t want one.
Yet, you observe rightly, these people like to call themselves “Christian.” It is safe to say that Jesus would not be a friend of Ayn Rand and her objectivism, or of Social Darwinists like the Koch Brothers, for that matter.

Most fundamentalist Christians signed on with the Far Right for the anti-abortion, or as they call it the “right to life” movement. Like people who love kittens and seldom visit cats awaiting extermination in shelters across America, they don’t seem to make the connection that the “right to life” transcends birth and is a responsibility of the state throughout the time that an American life exists on our land. They don’t stand up for the responsibility of caring for that life brought into this world as an American citizen.

So the defeat of the ACA is the gateway to the dismantling the rest of the government.

If protecting life is deemed not to be a function of the government, what other functions that protect life are also on the chopping block to be scooped up by the private sector?

Continue on this path, and we will all belong, via our work, in situational serfdom to this or that corporate oligarch that provides everything for us that the government no longer does. We will be in the feudal 21st century equivalent of the Dark Ages, with our families lives’ tied to corporate princes and kings offering us protection when the government fails to do so.
Sound extreme? Ask how any other political system in history has failed. When the state cannot care for its citizens, the forces undermining it take over those functions and take the people with them.

We need single-payer healthcare for all Americans.

For-profit insurance is a con: Pool together money from those least likely to use it, invest it, make a lot of money on it, and then pay out as little as possible and pocket the profits in tidy executive bonuses and dividend payouts to shareholders.
We already have a separate-but-unequal system today, based not on race, but on age, but it works:

It was put in place because the government had to step in. Insurers, knowing that people were living six to eight years longer, on average, than they did in 1900, couldn’t afford to pay out claims on so many people guaranteed to get very sick in their declining years. Millions of Americans on it are overwhelmingly satisfied with it. You have to be 65 to get into that club though.

Medicaid was established as part of Social Security by a Democratically controlled congress in 1965. It was set up to provide for the poor, the other large pool that the private insurance companies don’t want to cover. The program was expanded under Obamacare as a means of paying private insurers to provide equal basic coverage to millions of low income people, but because 20 states refused the money, it put their working poor under even more hardship, all with the intention of causing the Obamacare system to fail.

Their most effective weapon at demolishing American government is hitting them literally where they live. Creating insurance haves and have-nots gaming is a different kind of class warfare. Able versus disabled.

It is the subtle implication that covering the 10% without healthcare will somehow drain on the resources of the 90% who now enjoy health insurance, or that the already broken system will get worse.

They appeal to people’s fear of national plans that will leave them without care for months on end. Medicare changed America for seniors for the better, and single payer, Medicare for All, is the way for the government to fulfill its constitutional obligations to every citizen.

Today, even with the ACA, we waste billions of healthcare dollars every year and the system is broken beyond repair.

America’s Health Insurance Plans, a lobbying group for the health insurance industry, estimates that there are at least 1,300 health insurance companies nationally, each with its own bureaucracy.

All of those health insurance companies offer dozens to hundreds of active plans. The complexity of it all is so great that most physicians and hospitals rely on large staffs or whole companies that represent them to make sure that they get paid appropriately by the insurer under the insurance company’s rules governing all of these nuanced plans. That lays in a whole extra of siphon from the healthcare system.

Most insurance companies are for-profit, which means that hundreds of millions of dollars more are siphoned off of healthcare billings and into the pockets of the industry.

We must push for the goal of having every citizen of this country covered by the best healthcare possible, without the bureaucratic private mess that leads to at least 45,000 needless deaths annually, and more if Obamacare is repealed and 20M people are left without insurance.

To put that into perspective, that’s more than 2015 spike in reported traffic deaths, 38,500. All because insurance is out of reach.

We saw millions of people last week stand up for women’s rights. PETA has turned out hundreds of thousands of people over the years to protest cruelty against animals. Surely we can get a few million people to protest the democide of millions of Americans whose only crime is not being able to afford the skyrocketing costs of private health insurance.

One comment on “Health Care: The Real “Right to Life” the Right Wants Dead”