Bin Laden Made Big Oil Rich; GOP Means to Keep Them That Way 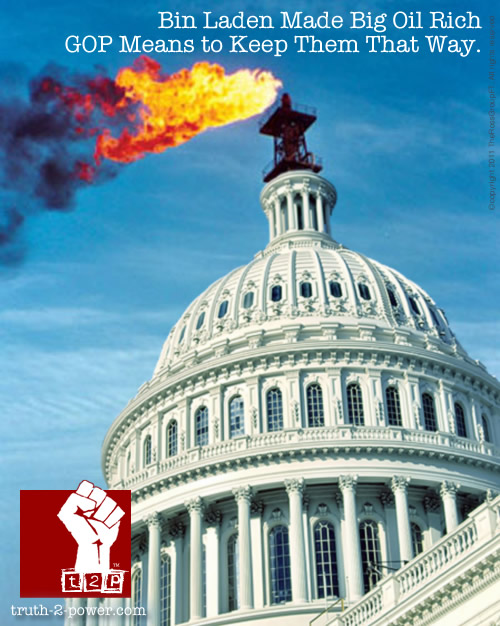 It is always on the days that the news flow is so obsessed with one big story that both parties in the House of Representatives are out to try and set up the next news cycle.  This week two purely political bills, one on Big Oil’s windfall profits tax break, and one on abortion, both were lobbed by politicians into motion.  The GOP means to keep Big Oil’s tax breaks, and make sure that they have some foot soldiers in their dwindling grass roots base by keeping anti-abortion groups happy.

The Boston Globe at Boston.com reports:

“Yesterday, House Democrats tried to force a vote on ending some tax breaks for big oil companies. The GOP beat back the effort, but now Democrats will use the vote to argue that Republicans support billions in tax breaks for some of the world’s most profitable companies. With such companies as Exxon Mobil Corp.reporting $11 billion in profits this past quarter, Democrats believe this is an issue ripe for the stump.”

Earlier in the week, the Republicans got their salvo in on abortion:

“Earlier this week, House Republicans overpowered resistance from Democrats to pass the “No Taxpayer Funding for Abortion Act,’’ which would strip tax deductions from people who buy private insurance that covers abortion and from businesses that offer benefit plans that cover the procedure.

Supporters say the bill is just an extension of a long-standing prohibition against spending federal tax money for abortions. Opponents say the bill pushes the definition of federal funds to an absurd level by including tax credits and would compel insurers to drop coverage of abortion services.”

The tectonic political plates have been shifting. Aside from the political O-Bomb that Obama dropped on the GOP with the capture and kill of Bin Laden, much of the House’s ambitiously draconian political agenda has been falling like a lead balloon on the public.

Meanwhile, the same poll shows that Americans favor raising taxes on top wage earners by a 69% to 28% who say nea.

Congressman Paul Ryan (R-WI), who launched the ambitious plan to privatize Medicare and roll the social safety net back to pre-FDR levels, can shake hands but no one wants to touch him. He has developed political leprosy.

It’s not just the Seven Dwarfs, the Who’s Not of Republican presidential ambition, that are running top speed away from Ryan and his plan. He is also persona-non-grata with House Republicans who have to run in 2012 in their districts, who were told to march into the political poo storm behind Ryan and, like good little lemmings, blindly did so.

Now that Speaker Boehner has read the polls and stuck his greasy finger into the political winds and found that it snapped off, his leadership is retreating from Health Care Reform and from Medicare reform.  The polling numbers suggest that the traction that they received in the mid-terms for beating back the 3% increase in taxes on the wealthiest of Americans, which was not supported by many of them, and is not holding up well in the polls, is also a non-starter for 2012 campaigning.  Boehner has lead several of his Right-wing lambs to the slaughter. Town hall meetings where the subject of Medicare is brought up get pretty ugly. Some people, who don’t have short-term memory problems, remind GOP incumbents of their jobs promises.  It is hard to sit on your positions when you’re perched on a two-legged stool.

Those two legs, the GOP’s two go-to  constituencies, Big Oil in the Corporatocracy, and grass-roots single-issue religious zealots, leaves them only the windfall profits tax exemption and abortion as two issues that will gain some traction with people who write checks and turn out to knock on doors and steal opponents’ campaign signs.

Abortion is a non-starter that is purely for political consumption by the grass roots.  The House knows that the Senate will kill it, and if, by some miracle, it sailed through the Senate, Mr. Obama will kill it.

The windfall profits taxes are another story.   Big Oil processors, and the producers of oil have made out like bandits, literally, since 9/11, as the chart below of the cost of a barrel of oil shows:

Before 9/11, world oil prices fluctuated between the teens and the mid-thirties.  After the first bombing scare at the World Trade Center in the late 1990s, where the car bomb failed, the price became more volatile. Then, after September of 2001, when Bin Laden’s plan using airplanes as bombs toppled the World Trade Center buildings, and George W. Bush used it as a pretense to invade Iraq, the stability of oil evaporated.

Prices have soared 700% from their range in the decades before 9/11.

The oil industry enjoys big tax breaks from the Government to explore and drill for oil.  They also get breaks, which past Republican administrations and congresses have woven into the fabric of our policy and law, on manufacturing and moving gasoline.

In a time when they are reaping billions in profit, they do not need such subsidies. Democrats tried this week to strip them of those tax breaks.  Republicans came back and shut that move down.  The GOP then began talking up getting rid of farm subsidies, a traditional Democratic party patron.

Both subsidies should go.  Food prices are also at an all-time high, and the family farmer, whom those subsidies were designed to protect, has been largely consumed by the Archer Daniels Midlands of the agricultural world that have turned agriculture into agribusiness.

The bad news for the GOP is that, in the current political winds, stripping Big Oil of its tax credits is going to be a big seller.  High oil prices limit employment. Mr. Obama has stuck with employment and jobs as a theme.  It was the correct tack for his ship of state into the political headwinds.

In a question in the Quinnipiac poll about priorities, cutting unemployment or reducing the deficit, those polled  were 54 – 35 in favor of cutting unemployment.  Both items queried separately received minority approval ratings, but together, the message is clear: Jobs first.

The Republicans have had months to launch a jobs bill. None has come. They have launched bills attacking every pet peeve that the radical Right has with government, on taxes, on health care, on spending.  Any that they claimed would create jobs were determined by the General Accounting Office and others to have a net negative impact on job creation.

If it is jobs, jobs, jobs Mr. Boehner, get to it.  If we need revenue, then we know that eliminating subsidies for EVERYONE is a good idea.  We can also look at bringing home the troops from Afghanistan while we’re at it.   Halliburton will have to find another country to bilk for a decade or two.